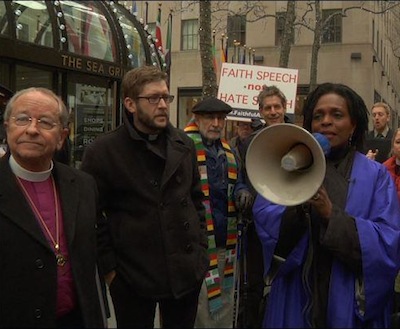 Faithful America was founded in 2004. We are the largest online community of Christians putting faith into action for social justice. Our members -- Catholic, Protestant, and more -- are sick of sitting by quietly while Jesus' message of good news is hijacked by the religious right to serve a hateful political agenda. We're organizing the faithful to challenge Christian nationalism and white supremacy and to renew the church's prophetic role in building a more free and just society.

We raise our collective voices through rapid-response digital campaigns that tap into the grassroots power of Christians across the nation. When corporations and religious institutions invoke a twisted definition of religious freedom to justify bigotry, we speak up. When hate groups purport to speak for Christianity, we act. When bishops embrace discrimination and partisanship, we stand with our grassroots Catholic members and hold the U.S. hierarchy accountable to the inspiring words of Pope Francis.

We're sticking up for courageous Christian voices acting for fairness and freedom in every denomination. We're fighting for social, economic, and racial justice, standing with the Black Lives Matter movement and upholding the Gospel's values of love, equality, and dignity. Together, we're helping make a difference for immigrants, refugees, the climate, the LGBTQ community, and more.

Faithful America is an independent 501(c)4 not-for-profit organization. We are not affiliated with any church or denomination. Our members come from many denominations and none; are both lay and ordained; and live in every state, Puerto Rico, and the District of Columbia.

At this time, 100% of our funding comes from our members -- from individual grassroots donations averaging less than $50. If you are appalled by the right's unchristian agenda of fear and hate and yearn to reclaim the prophetic role that Christian faith has historically played, we’d love to have your support!

A few of our successes

Working together, Faithful America members have:

Read more about these and other victories for love and social justice here.

Since July 1, 2019, Faithful America's grassroots campaigns have been led by our executive director, the Rev. Nathan Empsall (he/him).

Rev. @NathanEmpsall is an Episcopal priest and experienced organizer who holds both a Master of Divinity and a Master of Environmental Management, as well as a B.A. in government and Native American studies. Prior to seminary, he served as an online campaigner for the Sierra Club and Organizing for America, among other advocacy organizations. He has worked for numerous Episcopal Church dioceses and organizations including at the United Nations, is a volunteer member of his denomination's Task Force on Care of Creation and Environmental Racism, founded the independent Episcopal Climate News, and serves as a part-time parish priest.

(Although Rev. Nathan is personally an ordained priest, Faithful America is an independent, ecumenical organization and not affiliated with any church or denomination.)

Rev. Nathan took over from Michael Sherrard, who was recognized for his work at Faithful America as one of "14 Faith Leaders to Watch in 2014" by the Center for American Progress. We remain deeply grateful to Michael for so much hard work and success during his more than seven years at our helm.